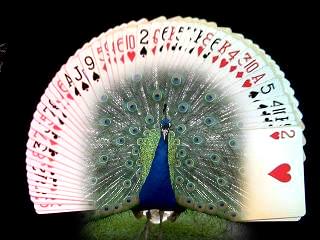 So I was at the beach this summer watching my kids doing the usual beach cavorty things with other kids, when one of the other kids’ moms saw me reading a magic book and said “I used to know a magician – a funny old guy named Charlie who used to come around the house when I was a kid.” Knowing she grew up here in LA I hazarded a guess, almost not daring to hope… “It wasn’t… Charlie Miller, was it?” “Charlie Miller!” she shouted. “Yeah! He taught me how to shuffle. You’ve heard of him?”

Now as anyone who lives in LA knows, sometimes you just cross paths with famous people – I’ve seen supermodels at my local Home Depot and Oscar winners at Hot Topic, and while this is always kind of fun, never has a celebrity sighting given me the thrill of this second-hand brush with one of the greats of card magic.

Wow. Just wow. I felt like shouting, “Listen up, people, one of my daughter’s friend’s moms learned how to shuffle from Charlie Miller! Suck on that as you ponder your greatness-lacking existences!”

I sent said mom this video just to confirm we were talking about the same funny old guy (and we were). But a telling thing for me was that she had no idea Charlie Miller was famous in some circles. Now maybe that’s because she was a kid at the time and so couldn’t know he was one of the greatest card men in history – that’s totally understandable. But honestly, I doubt many people out there apart from magicians know who Charlie Miller is. Or who Dai Vernon is. Or Ed Marlo.

I went to a magic show here in LA recently featuring some really accomplished close-up magicians – all extremely skilled and entertaining performers, all regulars at the Magic Castle. But the show didn’t go on – because I was the only person who showed up to watch. I kid you not.

The magicians were apologetic and invited me into the green room where they were sharing stories about odd things that could be done with male genitalia. (Again, I kid you not). Afterwards we all went off to a deli and spoke of many things, including how tough it is to make a living as a magician. At one point someone (okay, it was me) asked, “Are there any rich close-up magicians?”

There was a long pause.

Blaine? Sort of, but those stunts kind of disqualify him – Vernon would never have hung upside-down in aspic (or whatever). Steve Cohen? Maybe, but isn’t that more parlor magic? And it’s telling he calls himself “The Millionaire’s Magician” and not “The Millionaire Magician” (but we’re all rooting for you, dude!).

Of course, there are starving painters, starving dancers, starving musicians and starving actors – but there are also a smattering of rich painters, dancers, musicians and actors. It just seems that the giants in the other arts make way more money than the giants in close-up magic. I’m sure Steve Cohen makes a fine living, but still, I think he’s more likely to be hired for Brad Pitt’s birthday than Brad Pitt is to be hired for Cohen’s.

So why is close-up magic so underappreciated compared to other arts?

Recently, I came across one possible answer: a great TED lecture about a Darwinian approach to art by Denis Dutton. I encourage you to watch it in full, but for this post, I’ll summarize a few of his main points, especially as they relate to magic:

“The experience of beauty is one component in a whole series of Darwinian adaptation. Beauty is an adaptive effect which we extend and intensify in the creation and enjoyment of works of art and entertainment.”

Evolution shapes our sense of beauty in two ways: the first is natural selection – we tend to like and find attractive those things that help us survive (sweets, landscapes with lots of trees and water, Scarlett Johansson) and we dislike and find unattractive things that could hinder our survival (snakes, rotting meat covered with maggots, Mitch McConnell).

The second way is sexual selection. This accounts for things like the peacock’s tail which have nothing to do with the ability to survive in the wild and everything to do with helping them find a mate. It’s a “fitness signal”, a bit like Jeff McBride’s card fans, or Criss Angel’s shirts.

Dutton goes on to talk about the oldest known art object, hand axes (which predate even language) and how they served as signals to a potential mate:

He then extrapolates that to our predilections for art today:

“For us moderns, virtuoso technique is used to create imaginary worlds in fiction and in movies, to create intense emotions with music, painting and dance. But still, one fundamental trait of the ancestral personality persists in our esthetic cravings: the beauty we find in skilled performances. From Lascaux [cave paintings], to the Louvre to Carnegie Hall, human beings have a permanent, innate taste for virtuoso displays in the arts. We find beauty in something done well.”

Which leads me back to all the underappreciated close-up magicians. Sure, there are schools of magic that revel in showing off skill – XCM, manipulation – and while I’m not the biggest fan of this style, Dutton’s lecture has made me rethink these displays (at least from an evolutionary point of view – show-offy magicians do tend to date fairly hot women).

But by and large, the skill of a sleight of hand artist is hidden in a way it is not in other art forms. Yes, a great concert pianist makes it look effortless, but there’s a reason he’s positioned on stage so we can see his hands: those hands are doing freaking awesome things! And that’s a big part of the show.

But a sleight of hand artist is told to keep his greatest skills hidden to maintain the magical quality. So what qualities then emerge from his performance? Intelligence? Possibly. Fine motor control? I guess. Planning, conscientiousness, rare materials? Not so much. At best, it might instill a sense of true magic, a wizard-like omnipotence that could come in handy fighting the forces of darkness, or at tax time. But close-up magicians tend not to play this up. A good card man is less likely to be seen as a reality-altering Mage than as a huckster or a cheat. “I wouldn’t want to play cards with you!” goes the standard response to a card man.

When I was a teenager I asked the best card man in my home town of Toronto, “Who is the best card man you’ve ever seen?” Without hesitation, the guy answered “Alan Ackerman” and this was his reason: Ackerman’s Erdnase pass was invisible.

For whatever reason, I never forgot that – for decades, even though I’d never had the pleasure of seeing Ackerman perform live, his pass lingered in my mind as something synonymous with perfection. It was some kind of totem for me – something that many tried, and some could do passably (sorry), but only a chosen few could do absolutely invisibly, and Ackerman was one of those giants.

A couple weeks ago I was doing my usual Saturday afternoon thing hanging out at The Magic Apple when I saw this quiet, slightly awkward guy standing away from the crowd watching the proceedings. Just to be sociable I introduced myself and he shook my hand and said, “I’m Alan Ackerman.”

I told him the story of that card man who had told me about his Erdnase pass and – bless him! – Ackerman pulled a deck of cards out of his pocket. He showed the top card of the deck, shoved it in the middle (no DLs, I promise you). There was a pause – a sweet nothing of a pause – a gentle breeze of nothingness – and then he turned the top card over – it was the card he had just shoved into the middle.

“And that’s the Erdnase pass,” he said.

It was gorgeous – absolutely stunningly beautiful – I had shivers running down my spine.

But afterwards, I thought about it: here I was being blown away about seeing nothing. Anyone outside the magic community could be forgiven for thinking I’d lost my mind.

And by the same token you could forgive a public who doesn’t appreciate such invisible virtuosity, or a little girl who couldn’t distinguish a half-decent self-working card trick from the genius of Charlie Miller.