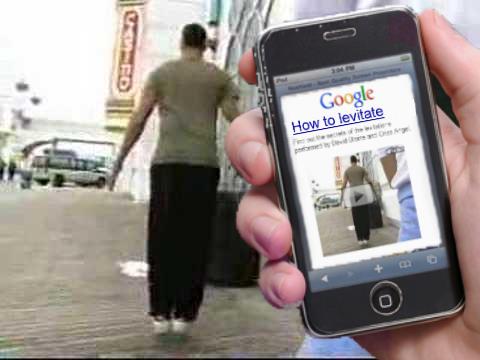 So you thought the worst thing that could happen during one of your performances was Perez Hilton tweeting “I would rather be getting a root canal” in the middle of your show.

Okay, maybe that is the worst. But how’s this for a new digital-age nightmare scenario:

You’re performing for a small group at a bar and they’re eating it up – all except for one skinny guy who seems somehow resistant to your charms. So you decide it’s time for a tried and true classic, one with a clear, engaging plot and just a hint of virtuosity. And so you launch into your well-honed Ambitious Card Routine.

You have the card selected, signed and put in the deck. Instantly it rises to the top. There are gasps and laughter from everyone at the table – everyone except that skinny guy. No problem – this trick has a great build and you’ll get him soon enough.

You shove the card into the middle once again as cleanly as you please – instantly, it’s back on top! You look up to acknowledge the applause. And that’s when you see that the skinny guy has taken out his cell phone.

Are you kidding me? He’s making a call in the middle of my performance?

No, actually, he’s not. He’s doing something much, much worse.

As you put the card in the middle, outjogged this time, you notice the skinny guy’s not making a call – he’s typing a search term into Google. As the card again rises to the top and the rest of the group is going wild, you catch a glimpse of what he has written…

The trick where the card rises to the top of the deck.

Oh! My! God! He’s looking up how I’m doing the trick in the middle of the trick!

Your heart races, your head swirls, your palms sweat. You’ve done this routine a thousand times, but suddenly you can’t remember the next phase. You start babbling…

You’re on track again and muscle memory takes over so you dare to peek at the skinny guy’s phone… He’s scrolling through some text on Ask.com. Ask.com! Who the hell are these Ask.com guys and why are they being so fucking helpful?!!

Meanwhile, your muscle memory has palmed the signed card so you can do that spectacular visual change you’ve practiced so many times. Except you’ve never done it with thick flop sweat on your palm. And so as you briefly cover the top card for the miracle revelation, the signed card won’t come off your palm! You try wriggling your fingers and jerking your hand in an attempt to shake off the card, but that only draws everyone’s attention to your hand and the card that clings to it like a fat booger, like a scarlet letter, like a sex tape leaked onto the internet.

You slap your palm on the deck and peel the card off with your other hand revealing the glistening, slightly warped card with the spectator’s sweat-smeared signature.

The reaction to that phase is somewhat more muted than usual. But the worst is yet to come. The skinny guy lowers his phone – he has a hint of a smile on his face as he announces:

“He does something called a double lift. That’s where the card seems to be on top but actually…”

The skinny guy’s words become fuzzy and indistinct, like the grown-up voices in old Charlie Brown specials. Waa-waa-waa-wa-wa-wa… Everyone has turned away from you now – they hang on the skinny guy’s words. When they turn back, their expressions have changed – they are a little sad, disappointed. Say it ain’t so, Joe.

I don’t know if this has ever happened, but I’m here to tell you it is totally possible. I entered the search term above into Google, found the method (at the top of the results) and read it, all in a little over a minute. That means someone can learn the secret of the Ambitious Card Routine in less time than it takes to perform it!

(By the way, if you enter Ambitious Card Routine into Youtube, the average length of the first page of routines is 3:47. That length multiplied by the 1070 hits for the effect (48 pages!) means that it would take you nearly 3 days of full-time viewing to watch them all. No offense to anyone who does the trick – I’ve done it myself many times – but three days of watching the same card get shoved in the middle only to rise to the top again and again and again strikes me as a vision of hell of Sisyphusian proportions).

Is the ambitious card routine a fluke in this regard? Sadly, it seems to be the rule these days.

Typing in “Blaine Levitation” gets you the secret of the Balducchi in the first hit. Ditto for “sawing a woman in half” or “cups and balls”. Want to know how to do the rising card trick? You get 943 hits in on-line videos alone.

What about something like the Chop Cup, an effect where the magician is unlikely to say the name of the effect while performing it? Surely that will be hard to track down. Not hardly: a search of four key elements (cup, ball, pocket, lemon) reveals the name of the effect in the first result and from there, the secret is just one more Google search away.

So how do we react to this nightmare scenario? Well, if you were Penn and Teller you could stage a race to see if you could perform a classic effect in less time than it takes a spectator with an iPhone to discover the secret. But for the rest of us, the best thing we can probably do with our fears is face them.

First off, if the above scenario ever did happen, would that ruin the experience of the magic show? I’d say it would if the only value of the show were in the secrets. I believe the more entertaining a show is, the less harm an exposure does (I also think that if it’s entertaining, the spectators will have much more to think about than just the secret and will be less likely to figure it out).

I mentioned in an earlier post that since my introduction to magic came from an act of exposure, I’ve never really felt that bad about exposure. But there’s more to it than that. When I went to university I started out as science major; curiosity, testing and intellectual rigor are the great virtues of science and, I believe, in all aspects of life. But let’s face it: curiosity, testing and intellectual rigor are not something we magicians value in our spectators: if they work out how we do a trick, we consider it a personal failure.

Of course, in many ways we should – a ton of magic is inept and performed long before it is ready. Now I don’t think a trick can be judged as successful simply by how many people it fools, but if it was, what would be the threshold of success? Assuming that no trick will ever fool 100% of an infinitely large audience, then what is the fooling ratio we would consider successful? 90%? 95% ? 99.99%?

Wherever you draw the line, somebody at some time is going to figure out one of your tricks. So what do we say about that person? Are they the enemy? Or do they in fact display admirable qualities: a keen curiosity, a sharp intellect, and the rigor and determination to work it out to a logical conclusion. Have they vanquished us, or have they passed a test. Are they to be hated, or welcomed as worthy of our elite brotherhood?

I think one reason performing for other magicians has appeal is that these performances have lower stakes: if they catch on to our method it’s because they’re magicians – they have a head start. There’s no shame in not fooling a magician.

Which brings me back to Penn and Teller. On their British TV show Fool Us they challenge magicians to do tricks that will – you guessed it – fool them. I know a lot of magicians had high hopes when Michael Vincent walked out on stage and a lot of those magicians were disappointed by his performance because it seemed like he didn’t even really try to fool them. Certainly someone of his skill could have done something a little more unusual, more of a magician fooler.

But I imagine (and I freely admit this could be nothing more than my own fancy) Vincent thought that this was in some way beneath him. Somewhere out there some 15-year-old has figured out some new method for some dull self-working trick that could fool Penn and Teller, but Vincent, by eschewing the challenge, chose instead to highlight his technique (both in the sense of his sleights and the elegance of his presentation). He was saying something over the head of the audience. But what?

There’s a scene in the Tavianni brothers’ Good Morning Babylon in which the great silent film director D. W. Griffith struggles to dictate a letter to an Italian filmmaker he admires. Part way through the letter he stops, tells his secretary to throw it out and says “Never mind. Artists communicate through their work.”

I thought of that scene as I watched Michael Vincent doing great work on an old classic which he must have known was not going to fool Penn and Teller. If artists do indeed communicate through their work, it was like Vincent was saying, “I’m not some kid out to impress you – I know you know how I do this, but I also know you know how good it is. I respect you enough to show you my best, but I respect myself enough to play by my rules, not yours. Watch this – you will not be fooled, but you will be amazed.” 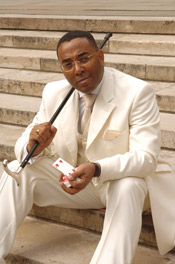 
Back to the Film and Magic Blog